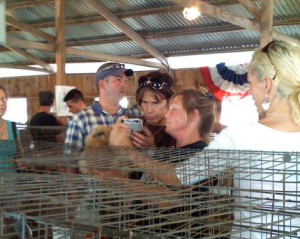 the waiting area while my car is being serviced and though I brought work to do, my attention is drawn to the large screen TV with the Today Show, and guest Steven Tyler, rock legend and lead singer of Aerosmith. I’m definitely a fan, having listened to Aerosmith since my teen years, attended a concert or two and am partial to the group since they’re from Massachusetts, my home state, with several of the band members having homes on the south shore, very close to home. (yup that’s a photo I caught of Steven at the Marshfield Fair several years back – 2007 – who was taking photos in the rabbit barn!)

As I listened to the fact that he’s soon to be releasing his first country album, it hit me, Steven Tyler is part of the “encore revolution”. What is it? It’s a large wave of people who are at a life stage where they have a desire to pursue a passion, do something more meaningful or have an impact on the world. As I listened to him being interviewed, he described how “country” was the only kind of music he could get on the old transistor radio when he was spending his summers in NH – some station in Fort Wayne, Indiana which played nothing but country. It was really the first music he took notice of at the young age of around 10 years old. He said it was that experience that led him toward the direction of music, and country has been with him this whole time, even while rockin’ all these years.

I LOVE that he’s pursuing this part of him that’s been pushed to the side for so long. Though he’s famous and has made millions, I’m sure it’s a huge personal risk and is taking great courage for him to put it out there. And there will probably be some naysayers, too. But I’m on his side, you GO Steven.

I hope he inspires people who are looking at their next step, or have had some idea, passion or artistic endeavor that’s been squelched or put on the back burner for a long time. None of us know how long we’ll be on the planet, and we all deserve to be happy and to do what we love and what we’re passionate about.

Is there something you’ve always wanted to do that’s been with you since childhood, but life’s circumstances led you in a different direction? Have you lost sight of YOUR passion? Have you put a dream on the back-burner? Or are you feeling a desire to do something more meaningful but you don’t know what that is? I know, I’ve been there. So I’ve developed a process that can help you reimagine and reconnect, then to make your vision real. If not now, when? Are you ready to join the Revolution?